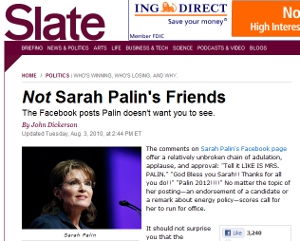 For a Slate article subtitled "The Facebook Posts Palin Doesn't Want You To See", perhaps I was expecting too much.

Generally speaking, Slate appears to try to make an issue of what, by and large, appears to be a sound and reasonable Facebook moderation policy employed by Sarah Palin's online team.

The deletions amount to a real-time look at how much effort and care Palin puts into protecting her public image. It's not just the number of posts that are screened out that gives some indication of how seriously Palin's team is monitoring things. The superfine mesh through which posts are sifted also gives an indication of the work involved. You don't get erased just for using vulgarity or pushing spam (which Facebook might remove anyway if flagged).

Replace the word "Palin" with "any reasonably funded public figure or candidate" and you start to wonder what exactly the fuss is all about.

As to Slate's methodology for analyzing the Palin team's Facebook moderation policies (emphasis mine):

How much work does it take to keep everything so sanitized? To help me find out, my colleague Jeremy Singer-Vine wrote a program to capture comments to Palin's page before the clean-up crew could arrive. (Here's an explanation of how Jeremy's program works.) All these posts were initially public, if only for a few minutes. We looked at the comments to 10 Palin posts over 12 days, capturing the deletions in the 24 hours after the posts were live. In that period, a rough average of 10 percent of total posts were deleted.

Ten percent? Why those newspeak-uttering, censorship-happy bastards! Seriously? I probably delete more than that in a given week on my Cachaçagora blog.

Mean comments about Sarah Palin. "Please go away from my wall. I do not like you or agree with any dumb thing you say or do."

I would have deleted this simply because the poster appears to be a deranged lunatic who believes that Mrs. Palin's Facebook content is getting shoved down his throat. This person probably clicked "Like" one day on a lark and couldn't find the "Unlike" link, typically buried in the left-hand margin. I'd remove this comment, but might try to send the commenter a complimentary tinfoil hat. Verdict: Delete.

The moderator of a Facebook page (or any community) owes it to the audience to police decorum. Big deal. Verdict: Delete.

Racial or ethnic slurs. "America's greatest threat is Marxism and International Jewry/Zionism! We will never regain our Liberty and Freedom until we expel every Jew from America!"

Again, the problem with deleting this? Are they somehow surprised that a Republican wouldn't allow such postings? I sense a double-standard from Slate here: Basically that a Democrat's Facebook team would delete this out of the need to maintain civility but, in the hands of a Republican, such a deletion must mean that they're trying to hide what they're really like! A-ha! Caught them!

Polite disagreement. "Sarah, perception is everything! I learned that in the military. All you have to do is disassociate yourself from those Tea Partiers that are indeed racist and the NAACP gones [sic] away," wrote one in response to Palin's post on the NAACP's charge that the Tea Party tolerated racism. "Even they [the NAACP] admit the Tea Party is not a racist organization. Mrs. Palin, I believe you to be an honorable Woman. You believe in your cause. Sometimes for the good of the cause one has to make a stand even to those that support the cause. Remember John Mccain, circa 2008 in which a woman stood up and called Candidate Obama a Muslim. The Honorable John Mccain rebuked her. This could be your moment."

I'm actually kind of borderline with this one. I don't expect mellifluous prose from every netizen, of course, but the comment shared here is very poorly written and can easily be misunderstood. I first read "those Tea Partiers that are indeed racist" as meaning a blanket statement applied to the entire group. It's clearer to me now that the commenter wants Palin to denounce any racists within the Tea Party.

Honestly, I think that racism as an element of even a significant minority within the Tea Party's membership is grossly overblown. As a result, it looks like Team Palin was a bit hypersensitive with this one. Verdict: Keep.

Too much agreement. "Do us a favor Sarah, trap a few Wolves and ship em to D.C., they do eat Rats don't they? Have a great trip Sarah, God Bless."

You could flip a coin with this one but, given today's environment, this post does imply that someone believes Sarah Palin should seek to do harm to elected officials. Verdict: Delete.

Criticism of her children. "please dont let your daughter do a reality show :( but i love your family and you ..hope thats just a rumor from the liberals."

When Bill Clinton took office, he had one big rule with the press: Hands off Chelsea. The standard then became that the children of a candidate or office-holder were generally off-limits to the press, even when the children were brought on the campaign trail. So, would one expect less from Palin, especially in an environment she can at least somewhat control? Verdict: Delete.

Allowing anything fringe on a site in this scenario invites great risk. But Slate's example here--however "muted"--is more about criticism of the media than it is about supporting the so-called "Birther" movement. Verdict: Keep, though items that perhaps more specifically promote conspiracy theories would be deleted.

In the end, Slate's analysis of Team Palin's Facebook policies is much like the Palin phenomenon itself: You'll be kind of left wondering what the point of it all was by the time you reach the end.

Not sure it's possible to discuss this without getting into the politics of it, but it strikes me as an interesting contrast to the Nestle/Greenpeace tossup on Nestle's Facebook page. Nestle seemed to be in a no-win position; they were going to catch hell whether they deleted comments or not. Are the rules different for business, or are politicians simply more accepting of the inevitability of criticism from their opposition?

Well, the Nestle issue had more to do with the actual responses that the representative posted.

There's online protest and then there's digital vandalism. When a company goes online, they should be prepared to accept some degree of the former. However, when it devolves into the latter, they have an obligation to their audiences to take reasonable measures.