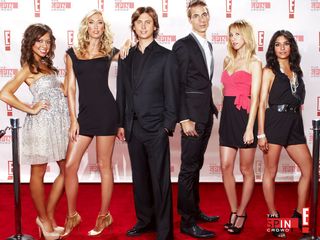 There are two principal issues that affect how PR is perceived in the popular imagination:

For those of you who haven't yet experienced the latest basic-cable-conveyed inconvenience to the poor electrons that zip through the wires leading up to your cable box, The Spin Crowd is like MTV's PoweR Girls, only without the excitement of having Lizzie "Terror of the Hamptons" Grubman at the helm.

Instead, we have Jonathan Cheban, whom the Post referred to as "The Devil Makes Everyone Else Wear Prada." In the first episode, Cheban browbeats a first-year associate into getting her lips plumped with collagen injections, calling her "homely" to her face and encouraging her to "step it up". (This is Hollywood, after all.) Post-plumping, he enthused that he just couldn't wait to get her in front of the clients, only to flip out when the associate informs him that she wisely opted for a more temporary procedure. Cheban's VP, Simon Huck, exacted revenge on the associate's behalf by playing on his boss's vanity and talking him into undergoing a painful cryo-removal process for his love handles.

Just another day at any PR firm, right?

Later, Cheban dangles a raise in front of another associate if she would just get their client's celebrity spokesperson Mario Lopez to take his shirt off. (The spokesperson, incidentally, does not use the client's product, which is a tanning aid of some kind. Total regulator-bait, for sure.)

I'm once again reminded of Charles Ferguson's severe appraisal of PR professionals in his book High Stakes, No Prisoners:

The [PR] women are smart, hard as nails, ruthless, and often stunningly gorgeous. The rank and file is completely dominated by attractive young women, various combinations of dragon lady and bimbette, whose job is social lubrication — opening doors, getting interviews, pushing you through a crowd toward sometone they're just dying to have you meet.

The [PR] men generally reminded me of my reaction to Clinton advisors like Dick Morris or David Gergen — greasy, overweight, amoral, somehow pathetic even when extremely successful.

Granted, watching newly hatched Hollywood publicists compile media lists or editorial calendars probably doesn't make for the best TV, to say nothing of being hunched over a computer writing a three-year-long strategic plan. So, I recognize that a lot of the show's shooting and editing is done for dramatic effect.

But I can't help feeling that this does a great disservice to PR, which has only relatively recently started to be taken seriously as a strategic, corporate-management-level discipline. (Not that I expect many folks to care, especially the media outlets that will review and report about this show.)

I entertain myself by imagining that this show does for the public's perception of PR what CSI did to jury pools across the United States. Just as real lawyers and criminologists will chuckle and scoff at the ten-minute DNA tests and the Beautiful Mind-like deduction powers of the protagonists, I think I might actually enjoy how far from reality this reality show gets.

Posted by Phil Gomes on Thursday, September 09, 2010 in The Spin Crowd | Permalink