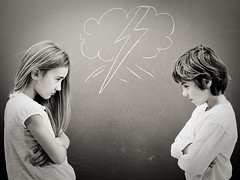 Over at The Wrap, Halfdan Hussey has an idea why Silicon Valley and Hollywood have made "strange bedfellows."

His general thesis as to why "Silliwood marriages" quickly fall apart is because of "culture clash". After all, there's the "maverick spirit" of Silicon Valley coming up against the "glitz and glamour" of Hollywood, to say nothing of the very different ways technology ideas and films get funded and the underlying philosophies that guide those approaches.

For all that, though, I find the theory unsatisfyingly vague. "Culture clash" can be used to explain a great many things.

My nearly ten years in Silicon Valley may not be entirely counterweighted by my nineteen months in Los Angeles, but more than three years in Chicago give me a comfortable distance from both. Here's how I see the problem in very basic terms:

Though innovation in processing, storage, and networking happens pretty much all over the world, the pre-emptive metaphor for technology innovation is... Silicon Valley. (This is why we have "Silicon Prairie", "Silicon Fjord", "Silicon Alley", "Silicon Tundra", "Silicon Flood-plain", and so on.)

Sure, there have been some big joint wins. Remember when SGI was on top of the world after Jurassic Park? For me, it was the first example—or just the most memorable one—of when Hollywood and Silicon Valley truly benefited from each other. Even people who weren't entirely plugged into the tech scene became at least peripherally aware of how the dinosaurs were rendered and made so lifelike. I remember that some, incredibly, could even name the company that was responsible.

But... Yup... As far as Hollywood is concerned, Silicon Valley remains the key enabler of thieves and mini-Fellinis with the audacity to nibble at Tinseltown's entertainment hegemony in the tiniest of bites.

Here is, where I think, the tension really lies. Hollywood absolutely needs Silicon Valley to deliver the innovations that make its product convenient and available to consumers. The technology industry is, of course, also critically essential to modern filmmaking, which increasingly relies on supercomputer-class systems that render, store, and transport digital characters and sets.

These same sets of technologies, unfortunately, also make it possible to obtain and distribute Hollywood's product through less-than-legal means. That said, the potential for abuse is not a sufficient argument for some of the wilder solutions that politicians have proposed.

Is this state of affairs likely to change? Well, one recently proposed solution has taken the form of big checks flowing to Southern California from the north, which I'm sure helps. That said, the "frenemies" conundrum may just end up being one of the business world's persistently insoluble quandaries.

Posted by Phil Gomes on Sunday, November 28, 2010 in Entertainment | Permalink

I think there's no more clear example of how right you are than the story that's making the rounds right now about how the studios, which have willingly given Netflix control of their digital futures, which they are now seeking to reclaim. Netflix - and the market in general - has evolved in ways Hollywood didn't anticipate.

While Netflix sees itself as innovating in much the way any other tech firm would, Hollywood sees it as a threat to entrenched interests and is looking for ways to muzzle it. It's completely legal but the studios aren't making as money as they think they're entitled to and so are looking for any means to cut off Netflix.

Unfortunately for them this will mean they're crippling one of the preferred tools of the actual end audience, but that's not important so long as they can artificially keep DVD sales inflated until the last possible moment, when desperation forces them to make a hard decision.

Silicon Valley (or whatever you prefer to call it) fails fast and iterates quickly. Hollywood does neither of those things.