My Cachaçagora Project: What I've Learned 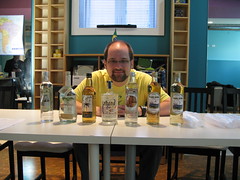 Three years ago this month, I started a blog called "Cachaçagora."

Long story short, my wife is from Rio de Janeiro and her mom and stepdad are evangelists for well-made cachaça (pronounced "ka-SHAH-suh"). Distilled from sugarcane juice, cachaça is the national alcoholic beverage of Brazil and the third most-distilled spirit in the world. Of the 1.3 billion liters or so that the country produces among its more than 5,000 distillers of widely varying quality, only a fraction of a percent makes it to the northern hemisphere. (The balance that stays in Brazil amounts to about six or seven liters for every man, woman and child in the country, which perhaps helps explain Carnaval to some of you.)

One day while in Rio, generally relaxing with my laptop and waiting for folks to get ready, something occured to me while I was going through some feeds. It seems that the sole notion of "community" that the majority of Web 2.0 PR/marketing royalty actually understands only extends so far as how they leveraged that community, and the mainstream media interest around same, to make themselves famous. Making the leap from that experience to helping a client manage its own reputation online is a much bigger chasm than many believe.

I came to the conclusion that blogging about PR and social media alone (which I had done since 2001) was meager gruel with which to feed instinct and understanding about the following:

So... 90 minutes of messing around with TypePad and GIMP resulted in Cachaçagora, where I try my best to give North American (and global) audiences a sense of the versatility and uniqueness of Brazil's national spirit. There's also a companion Facebook group and Twitter however, commitments being what they are, they only serve as more or less as notification engines. I feature different brands, cocktail recipes and, scarce time permitting, the occasional distillery feature.

Years later, my presentation "Everything I (Now) Know About PR I Learned from Cachaça" is one of my most popular talks. (It gets even more so if I pass out a sample or two, believe me.) I've delivered this five or six times now.

The full presentation is a ten-point list. Here are three airplane-bottle-sized samples after the jump.

If you don't add value, you risk (and richly deserve) disintermediation.

One brand I work with has a PR firm. They do a pretty good job at sending review samples, setting up appointments, emailing event reminders and so on.

The thing is, the distillery founder and his admin are very accessible via email and Facebook. I get a lot more done going through them. They don't seem to mind working with me directly. I haven't spoken to their agency in a year.

At least three other brands trying to get into the U.S. have either axed their U.S. agencies or allowed them to become a non-issue. So, if the only thing you're doing for your organization or client is more akin to a shipping clerk than a PR counselor, you're going to find your career assuming room-temperature quickly.

Tell your story smartly and in more than words.

I find the blind craze to hire just any ol' "Digital Native" beyond silly. ("After all," the rationale goes, "they grew up with this stuff!") Like anything else, there are good ones and there are bad ones. That said, the best agency contact I worked with was a young twentysomething who truly knew how to get me to drop everything and write. Every correspondence was not only meaningful and had an excellent core idea behind it, but offered multimedia assets as well. Most importantly, based on what I saw in other places, she also seemed to know what kind of item I might pass on; she didn't send me every publicity item.

"Give 'em free product" is not the best, or even a good, way to go.

I won't lie to you: getting free cachaça to taste is very, very nice. That said, brands that have a relationship with me solely on that level are grossly devaluing their social capital. If, after a brainstorm, your program's  community engagement only exists as a giveaway, you seriously need to go back to the woodshed.

What works: access. The best brands have put me in touch with bartenders, mixologists, their master distillers, and so on. One brand even got me an interview with the king of mixologists himself, Tony Abou-Ganim. The smaller distilleries have allowed me to write and film mini-features of their work.

At the core of these points (as well as the other seven) is the notion that the best distilleries have an innate understanding of mutual, objective value: when their communications needs help me make a better Cachacagora, we both win. It's the long-term win-win that too many marketers so often miss in the effort to make short-term clip-count and page-view goals.

Please, Sir, may I have some more? You've already got me thinking about how to apply what you have learned to a product one can neither eat nor drink, i.e, public affairs/current events podcasts.

What I found particularly interesting was where you said "At least three other brands trying to get into the U.S. have either axed their U.S. agencies or allowed them to become a non-issue." If this is a new trend then won’t it have profound implications for the PR industry? Personally I think it’s great that company owners or administrators now have the ability to handle advertising and marketing in new territories without having to go through PR middlemen.

Well, I didn't say it was a "trend", it's just what I've observed from three smallish companies in this particular niche.

Make no mistake: There will always be a market for the guy who can tell your company's story better than you can.

That said, I surmise that these axed agencies functioned as little more thanvalue-added fulfillment houses rather than communications consultancies.

The lesson for PR folks--agency or otherwise--is that there will be more consistent need to prove value on a day-to-day and long-term basis. This means that the tasks we current ascribe to PR folks will necessarily change.

Thanks for stopping by.