PR: We Have One Shot 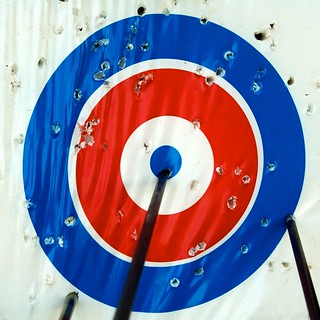 Earlier this year, a professional organization included me on a bcc'ed cattle-call seeking volunteers to help deliver a long-form seminar on "culture-jacking" a la this year's Super Bowl and subsequent events. I responded that I tend to take a strategic and measured view of such things, so the organizers could absolutely rely on me to ensure that the session stayed meaningful and wouldn't turn into a rah-rah session.

I didn't get a response. With a pitch like that and given the frothy tenor that often surrounds that kind of thing, I didn't really expect to.

For the past several months, everyone has been running around trying to be the next illumination-challenged snack experience. Some will be good at it. Some will excel at it. Most efforts will sadly amount to tolerated digital vandalism, the result of "checkbox marketing." ("Yup! Our brand TwitPic'ed something during the Indy 500. Well, glad I got that out of the way. Gonna email my boss now.")

As I've often observed, there is no hand yet imagined that our industry will not overplay. I fear that this industry about to do it again with poor executions of "content marketing" and its hyperkinetic sibling "real-time marketing."

Let's put aside for a moment that the public relations industry, all things considered, should have been absolutely laser-focused on creating dynamite media assets ("content") and making them relevant in the moment ("real-time") all along.

Shame on us, really.

Unfortunately, in the online community context, "real-time marketing" is something that far too many confuse with "advertisements generated on-the-fly and transmitted via social media." This is more of a bug than a feature in online communities. Consider the following:

In short, the PR industry has to demonstrate that it can make companies meaningful in online communities while not crapping up the entire Internet. If it doesn't, it will absolutely destroy companies' license to operate online.

In this environment, understanding the following is what will separate winners from losers:

Timely content that possesses objectively educational, journalistic, or entertainment qualities is the price of admission. Full-stop.

To say nothing of a company's owned and social media presences, this is especially important in a world where journalistic enterprises are exploring company partnerships, "native advertising," and plain ol' advertorial opportunities in order to help keep the lights on. (Again, advertising playing a supporting role to PR.) Even as much of a Hail-Mary revenue pass as this is, publishers must know that no amount of money from a company will be worth sacrificing long-term integrity of their media properties if the sponsored, PR-generated content stinks. Further, regulators are already assuming we're going to get this wrong without their help—another lost opportunity.

Your community matters. Your client/company matters. Be guided by them, not the trade press, awards, pundits, or your ego.

As I always tell young community managers, "Support your client, but stand for your community." I guarantee you that most efforts to embrace real-time marketing are going to naively treat communities as sad, wandering, empty vessels who anxiously await to be filled up with a company's brand message. This is incredibly wrong. I love guitar companies very nearly to the point of distraction but I guarantee you I will drop their access to my attention that quickly if my newsfeed is clotted up with any irrelevant crud from them. Unfortunately, it evidently doesn't take much to impress the trade and business press when it comes to this kind of thing, which helps skew incentives somewhat.

Get your hands really, really dirty.

Those funny little graphics many folks (often inaccurately, annoyingly) call "memes" started in places that most PR folks wouldn't want to be caught dead in, like 4chan. "Internet culture" becomes mainstream culture very quickly and you need to keep your ears to some very different—some might say even somewhat dangerous—rails. Don't be satisfied with merely staying ahead of your boss and mistaking that for being good at your job.

If you're thinking "it's-just-like-ads-only-faster," please find another career.

"Ads-only-faster" will only motivate someone to invent a TiVo-only-faster for the Internet. If PR inspires people to build something that does to PR what TiVo was supposed to do to television advertising, we'll know (perhaps too late) that we failed.

Our industry is in a rather precarious place at the moment—far more than any number of breathless pundits would care to admit. Let's not blow it.

Posted by Phil Gomes on Tuesday, September 24, 2013 in Social Media, State of the Profession | Permalink