« At EdelmanDigital.Com: The STEM Moment in a Post-Network Age | Main | The Future of Trust is Decentralization »

Remembering One of Metal’s Greatest Guitarists, Ten Years After His Murder 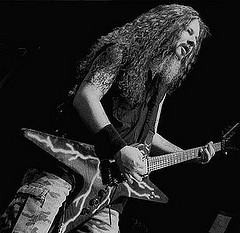 It’s difficult to overstate the impact that guitarist “Dimebag” Darrell Abbott and his band Pantera had on the music industry in general and the health of the metal genre in particular. Pantera steadily built up a following during the 1980s and, by 1994 (when heavy metal was deemed a hopeless musical anachronism), delivered the first extreme metal album to debut at #1 on the Billboard charts, Far Beyond Driven.

Today is the tenth anniversary of the guitarist’s untimely death at the hands of a deranged fan, who charged the Alrosa Villa stage with a handgun during a performance of Dime’s post-Pantera project, Damageplan. As I reflect on where I was when I heard the news the next day (a notably cold morning in my drafty living room in Alameda, Calif.), here are lessons that I feel Dime teaches us a decade later.

The Importance of Family and Taking the Long Way

Pantera, at least in the beginning and through its heyday, was more or less a family business, with Dime’s brother Vinnie on drums and the albums recorded at their father’s studio in Amarillo, Texas. This early bond would survive temptation and, thus, solidify Pantera’s place among the very best and most revered metal acts.

Lacking a lead guitarist, Megadeth was looking for someone to fill the empty slot and Dime found himself at the top of this list. Pantera at the time was largely a club act in Texas and Megadeth was one of the “Big Four” bands in thrash metal--the temptation to make the move was obvious.

Dime had one condition for signing up: That Megadeth also hire his brother Vinnie as the drummer. The band balked and so did Dime… right out of the gig. It was a good thing too, because a trio of truly groundbreaking Pantera albums followed: Cowboys From Hell, A Vulgar Display of Power, and the aforementioned Far Beyond Driven.

This story struck a particular chord with me, as I’m employed by a family business that has received many acquisition offers during it’s 62 years of business and is, today, the largest in its field by revenue. Such a move to a high-profile act like Megadeth would have most certainly but Dime on the fast track to metal stardom. However, he passionately believed in Pantera’s shared vision and, most importantly, the value of family.

Remembering What It Was Like to Be a Fan

Businesses all too often forget what it was like to be the people who had the itch that inspired them to found the company that scratched it for others. Dime’s gonzo, tireless, liver-abusing joie de vivre was only matched by--perhaps even fueled by--a love for the band’s fans. This was, in turn, inspired by the fact that he often felt he was one of them, merely just fortunate enough to be on the other side of the stage. (It’s worth noting that he wore a neckchain with a razorblade pendant, a gift from his longtime girlfriend as a tribute to the classic Judas Priest album British Steel.)

It’s hard for many of us to imagine staying humble after, say, reaching the pinnacle of music stardom or even, much earlier, getting banned from guitar contests after winning so many of them. Much like Ronnie James Dio, whom I wrote about earlier this year, Dime wouldn’t stop hanging out or signing autographs until every fan felt that they got what they came for.

Thus, fans eventually adopted one of Dime’s catchphrases: “getcha pull,” as in “Here’... Getcha pull off of this bottle of beer.” It has since come to mean something along the lines of “Get the most out of this experience” or “Do what you need to do to have a good time.”

The Power of Remembering the Little Things

Dime’s favorite cocktail (and I admit a certain fondness for it myself) was the “Black Tooth Grin.” Named for a lyric in a Megadeth song, it was composed of Seagram’s 7 or Crown Royal with a tiny splash of cola, consumed as a shot.

Anthrax guitarist Scott Ian recalls that, while he loved partying with Dime, his host’s choice of whiskey was too sweet for his particular tastes. (By then, Ian admits to have become a “bourbon snob.”) Much later, the next time they got together, Dime ushered Ian to the catering table, lifted the tablecloth, and showed him the bottles of Maker’s Mark that he got just for him. “Just so you know, your Black Tooths are made with that.”

It’s one thing to make a fan or a colleague feel special, but it’s quite another to inspire someone to take that kindness and run their lives and businesses accordingly. Foo Fighters frontman Dave Grohl related the following to Rolling Stone:

That backstage hospitality we try to have – it all came from Pantera. [Guitarist] Dimebag Darrell was the nicest...guy in the world. He could walk in and do a shot of Crown Royal with Justin Bieber, with Rick Nielsen, with James Brown – he was everybody's best friend. And you could feel that energy when he was playing.

After that day, I was like, “From now on, everybody's allowed in this room. I don't care if it's Britney Spears.” I became the backstage best friend. Whenever I showed up at a festival, the first thing I'd do is grab a bottle of whiskey and go knocking on doors to see who the funniest people are.”

As Anthrax’s Ian separately recalls, “Once you shared drinks with that guy, you became a part of his extended family. He really did put his family and friends first, and for him, everyone was his family.”

In closing, The Dallas Observer offers some final thoughts:

It is easy to say Dimebag is gone, that he died in 2004 and that was that. It wasn't though. Randy Rhoads died and Ozzy kept putting out records. Cliff Burton died and Metallica kept touring. (Whether either was ever the same is another matter.) When Dimebag died, things ended with him. People understood it then, just as they do now. You can't replace Dime. You just can't.

Posted by Phil Gomes on Monday, December 08, 2014 in Entertainment | Permalink